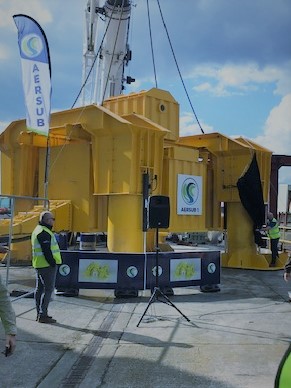 Michael D’Arcy, Fine Gael TD for Wexford and Minister of State at the Department of Finance and Public Expenditure and Reform formally unveiled AERSUB together with granddaughter of company founder and joint patent holder for AERSUB David Kinsella in front of a crowd of more than seventy specially invited guests from across the energy industry as well as members of the Kinsella family and friends.

David Kinsella, Managing Director of Irish Sea Contractors stated: “I feel like the team I have coached and poured my heart and soul into these last few years has just won the county GAA finals. I am incredibly proud of all of the Irish Sea Contractors team and family who have made this a reality and look forward to completing our first customer cable repair using AERSUB soon.”

Irish Sea Contractors, based in Ferns, Co. Wexford Ireland, was formed in 2010, and is a young, dynamic and innovative organisation with a wealth of knowledge and experience with more than 30 years’ in-house expertise. It is owned by Mr. David Kinsella and his family. Irish Sea Contractor’s UK subsidiary business is Searchwise based in Aberdeenshire, Scotland. Irish Sea Contractors specialise in providing best in class underwater engineering solutions and services to global customers in the fields of Offshore Renewables incl. Offshore Wind; Fibre Optic Cables; Power Cables; Oil and Gas; Shipping; Marine Civil Engineering and Marine Salvage.

Rosslare Europort is one of Ireland’s leading ports. Located on the south east coast of Ireland and less than two hours from Dublin in Co. Wexford, Ireland, it offers ferry connections to the UK and Europe. Rosslare Port is owned and operated by Iarnród Éireann and was also involved in Arklow Bank offshore wind farm.