The latest iShip Index  published by the Irish Maritime Development Office (IMDO) shows that shipping and port activity in the Republic of Ireland fell by 2% in the fourth quarter of 2016 when compared to the corresponding period of 2015.

The latest iShip Index* published by the Irish Maritime Development Office (IMDO) shows that shipping and port activity in the Republic of Ireland fell by 2% in the fourth quarter of 2016 when compared to the corresponding period of 2015**.

However, the drop can be largely explained by a 7% contraction in Bulk traffic which was in turn driven by a 10% fall in Dry Bulk freight. On the contrary, unitised trade continued to rise steadily. Unitised trade is comprised of Lift-on Lift-off (Lo-Lo) and Roll-on Roll-off (Ro-Ro) traffic, and correlates heavily with Irish GDP levels.

Breaking down the figures

Over 80% of ROI Ro-Ro traffic moves between the United Kingdom (UK) and the Republic of Ireland (ROI). As such, together with Lo-Lo (containerised trade), these categories provide a good reflection as to the performance of trade between both economies.

Laden Imports for the ROI grew by 4%. Laden Exports increased by 7%.

When Northern Irish ports are included, Laden Lo-Lo traffic growth remains at 5%. This figure was driven by Laden import growth of 3% for the island of Ireland, and laden export growth of 7%.

As mentioned above, the 7% drop in ROI bulk traffic was driven primarily by a 10% drop-off in Dry Bulk traffic. This market segment was particularly affected by a decline in volumes of coal and animal feed, down 51% and 9% respectively.

Offsetting some of drop in ROI Bulk, Northern Irish ports saw 6% growth in Total Bulk traffic in Q4, which meant that all island total bulk traffic saw only a 4% reduction.

The Central Bank in its most recent bulletin noted that to date, due to the absence of any weakening in the U.K economy, the impact on the Irish economy has been through the volatility of the euro/sterling exchange rate. Forecasted GDP growth remains positive. The Central Bank went on to say that while consumer sentiment (as measured by the ESRI consumer sentiment index) declined in Q4 2016, it has rebounded to its highest level since June 2016.

*The iShip index is a volume index for all freight traffic moved to and from the Republic of Ireland. It is a quarterly weighted indicator which gauges the health of the Irish maritime industry and the wider economy. Created by the Irish Maritime Development Office, the index is comprised of five separate indices, representing the main maritime traffic categories moving through ports in the State: Lo/Lo, Ro/Ro, Dry Bulk, Liquid Bulk & Break Bulk.

**All Q4 2016 figures represent the percentage change when compared to Q4 2015. This is also referred to as the “year on year” or “year over year” change. This is done to mitigate problems of seasonality within the figures. 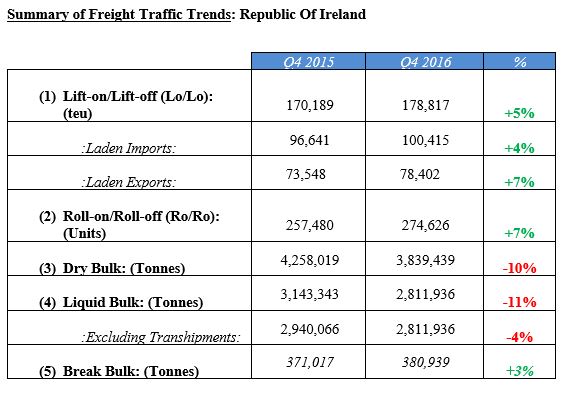