The latest quarterly iShip Index, published by the Irish Maritime Development Office (IMDO) shows that shipping and port activity in the Republic of Ireland rose by 2% in the third quarter of 2016 when compared to the corresponding period of 2015.

According to the latest iShip Index* published by the Irish Maritime Development Office (IMDO), shipping and port activity in the Republic of Ireland rose by 2% in the third quarter of 2016 when compared to the corresponding period of 2015. At 940, the iShip index has registered its highest figure in any Q3 period since records began in 2007. The latest analysis indicates that four of the five principal freight segments grew in the third quarter of 2016.

The majority of Ro/Ro traffic moves between Ireland and Great Britain, meaning this freight segment is a simple but reliable indicator of the level of trade between both economies. The Ro/Ro freight sector saw volume growth of 5% in the third quarter. However, this is the fourth consecutive Q3 increase in this freight category since 2012.

As for Lo/Lo traffic, this has now seen three consecutive Q3 increases, the largest of which (6%) has come this quarter. Both Lo/Lo imports and exports performed strongly, rising by 5% and 7% respectively. Overall, Lo/Lo laden traffic in ROI increased 6% to 174,791 TEU.

When reviewing unitised traffic it is worth noting that both Lo/Lo and Ro/Ro freight move in an all-island setting. Therefore, when Northern Irish ports are included, all-island Ro/Ro volume grew by 4% in Q3 2016, while all-island Lo/Lo traffic grew by 2%. All island traffic in the Lo/Lo sector has grown 4% since January 2016, with imports rising 4% and exports 3% during that period.

The overall bulk traffic segment saw tonnage volumes decrease by 0.02%, excluding transshipments, when compared to the previous year. This was driven primarily by a 10% drop-off in liquid bulk as well as a 14% drop in coal. Break bulk, which largely consists of imports of construction and project related commodities, increased by 7%. There was a 3% rise in Dry Bulk traffic for Q3 2016 driven mainly by fertilizer. This reflects the reality that a high degree of fluctuation in traffic volume is typical in the Dry Bulk market when viewed on a quarterly basis.

*iShip Index: The iShip index is a volume index for all freight traffic moved to and from the Republic of Ireland. This does not include passengers and transhipment activity. More information on the iShip index can be accessed here. 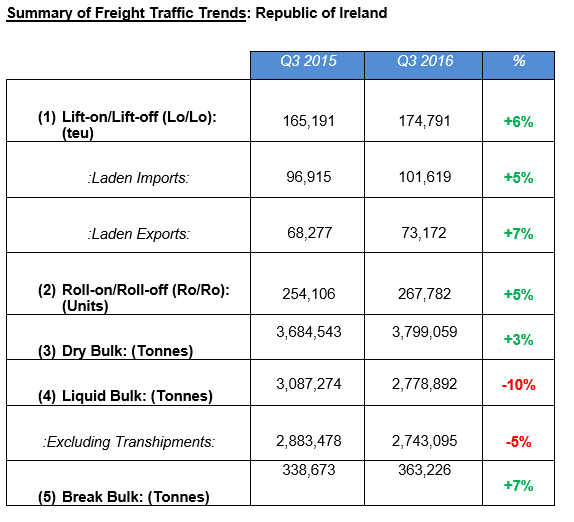