Shipping and port activity in the Republic of Ireland rose by 3% in the second quarter of 2015 when compared to the corresponding period of 2014, according to the latest quarterly iShip Index published today by the Irish Maritime Development Office (IMDO).

Shipping and port activity in the Republic of Ireland rose by 3% in the second quarter of 2015 when compared to the corresponding period of 2014, according to the latest quarterly iShip Index* published today by the Irish Maritime Development Office (IMDO). The latest analysis also indicates that four of the five principal freight segments grew in the second quarter of 2015.

Unitised traffic which consists of Roll-on/Roll-off (Ro/Ro) off and Lift-on/Lift-off (Lo/Lo) traffic continued to rise steadily and has now shown consistent growth for an extended period, with an average growth of 6% per quarter in unitised traffic since Q2 2013 as measured by the IMDO’s iShip Index*.

The majority of Ro/Ro traffic moves between Ireland and Great Britain. This freight segment is a simple but reliable indicator of the level of trade between both economies. Encouragingly, the Ro/Ro freight sector saw volume growth of 7% in the second quarter to 258,390 units. This is the tenth consecutive quarterly increase that Ro/Ro freight traffic has experienced.

Lo/Lo imports have now risen for seven consecutive quarters, reaching 95,550 teu. Lo/Lo exports also grew strongly rising 9% to reach 74,558 teu, the highest recorded figure since Q2 2008 when container exports stood at 76,752 teu. Overall, Lo/Lo container traffic increased 10% to 170,108 teu.  When reviewing unitised traffic it is worth noting that both Lo/Lo and Roll-on/Roll-off freight moves in an all-Island setting. Therefore when Northern Irish Ports are included, all-island Ro/Ro volume grew by 4% in Q2 2015. All Island traffic in the Lo/Lo sector grew 5% overall, with imports rising 6% and exports 4% for Q2 2015.

The overall bulk traffic segment saw tonnage volumes increase by 1%, excluding transhipments, when compared to the previous year. This was driven by a strong increase in traffic in liquid bulk which rose 11% (again oil transhipments excluded), with petroleum based products in particular showing strong growth. Break bulk, which largely consists of imports of construction and project related commodities, increased by 14%. Break bulk has now seen nine consecutive quarterly increases. There was a 6% fall in Dry Bulk traffic for Q2 2015 with trade in animal feed, fertiliser and coal affected the most. This follows a 6% increase in Q1, with a high degree of fluctuation in traffic volume typical in the dry bulk market when viewed on a quarterly basis.

Note: *The iShip index is a volume index for all freight traffic moved to and from the Republic of Ireland. This does not include passengers, and transshipment activity.
Note: All freight and passenger comparisons are done on a quarterly basis (Q2 2014 v Q2 2015) 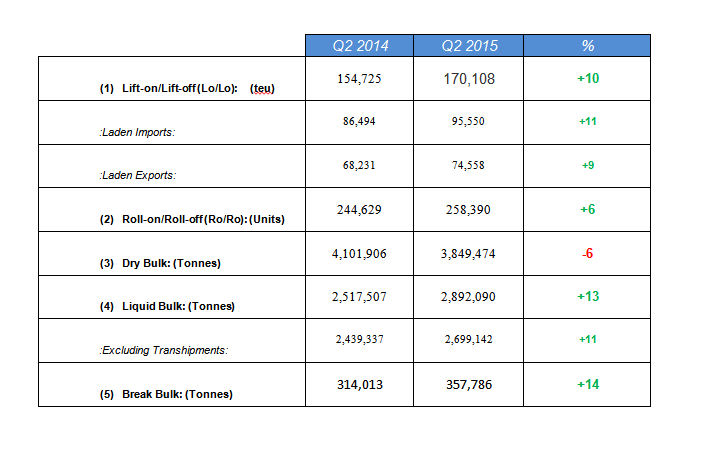 Irish Maritime Development Office (IMDO) The Irish Maritime Development Office (IMDO) is the agency that promotes and assists the development of Irish shipping and Irish shipping services. The IMDO advises the Minister of Transport on the development and co-ordination of policy in the shipping and shipping services sector so as to protect and create employment. The IMDO releases statistical analysis of the Irish maritime freight and is also responsible for the promotion of the Irish tonnage tax regime.